We’re taking a different approach to controls this year.  After reading Fossen’s paper (recommended by Patrick Walters), Jacob applied a nonlinear controller to the boat’s azimuth drive.  The thruster mapper finds the optimal orientation of the thrusters and calculates the amount of thrust to move the boat along any vector.

We took the boat to a local pool and began testing Jacob’s controller.  First we tested the remote control node (which worked well after an hour of testing).  Next we tested autonomous station holding.  Station holding did not work quite as well as the RC node.  Its behaviors weren’t apparent.  The low level path planner gains probably need to be tuned.  We’ll try it again the next time we’re in the water. 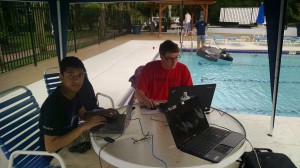 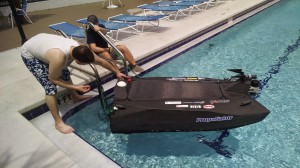