Making Space in the Lab

After the dust settled from the summer competitions, we looked around our lab and realized that our lab was a mess.  All of the tables were either covered in parts or had a marine robot on top.  During the cleaning process, several team members decided that it would be a good idea to suspend the boats from the ceiling.  We looked up plans on building a pulley hoist system and applied them to our lab projects.  Three weeks later, our boat mold, prototype, and two hulls have been suspended from the ceiling.  Now the lab can use the tables for other projects. 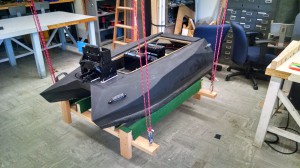