Due to the outreach that Team PropaGator was performing on the Navajo Nation in AZ, they were awarded five SeaPerch (robot submarine) kits at AUVSI’s 7th Annual RoboBoat Competition last July. The team decided to use these kits to further expand their S.T.E.M. outreach to Native students by donating them to Citizen Potawatomi Nation in Oklahoma.  The tribe just received the kits and judging by the smiles on their students’ faces, we think that they’ve found a good home: http://www.potawatomi.org/news/top-stories/1502-tribal-youth-close-out-2014-with-holiday-atmosphere-and-emphasis-on-stem 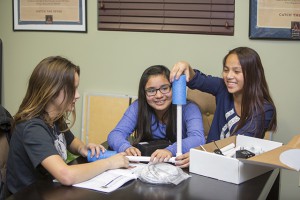