After finishing the aluminum parts for our rig (aluminum bearings vice ABS, see previous post), we ran the motor assembly for several hours.  The only load on the system was the prop moving air.  After several  hours of running (25-50%) we inspected the setup.  Everything looked good and the motor was only slightly warm.  Next we ran the motor at 100% for 20 minutes.  After the 20 minutes we inspected the band.  The only sign of wear was a single fiber strand on the belt that had come loose.  We removed the strand and prepared to the setup for water load testing.

To test the motor in water, we mounted the motor assembly into a tub.  The tub was then filled until the make-shift prop was submerged under two inches of water.  Testing the propeller confirmed our hypothesis that it would spray water everywhere.  Jackson created a water guard for testing on Monday. 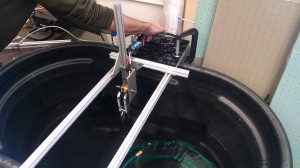 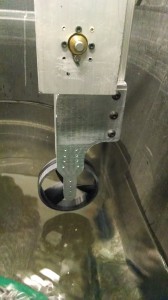 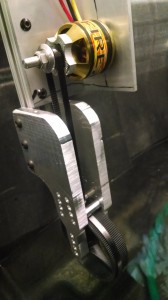